A few metres from the coast, near the river Idro, and just a stone’s throw from the Church of St. Antonio, there is a real oasis of taste just waiting to be discovered, where you will find genuine flavours and delicious traditional dishes and wines from Mediterranean cuisine.

Al Tartufo – restaurant- comes from Giuliano and his father Aldo’s great passion for harvesting highly-prized truffles and the desire to also bring their knowledge and creativity into the kitchen.

Creativity which already characterises the restaurant setting, furnished in wood and consisting of one large dining room and open kitchen, with the desire to create something different, and with an outdoor patio where one can enjoy lunch or dinner in the open air.

The restaurant serves dishes using the finest local products, with aromas and flavours from local tradition, using innovative culinary techniques, enriched by a wine list that’s thanks to research personally carried out in the field to track down the ideal accompaniment for the food. 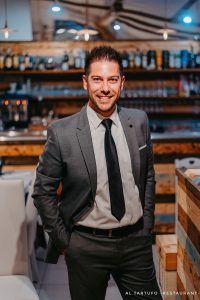 “I believe that Italy is still a good bet, and it takes people just like me who have a passion for their work, simple folk with determination, to make us realise it’s not all lost, contrary to what many might say. Having the willpower to set goals and to keep pressing ahead until we achieve them is the first step to not letting our Country cave in on itself. We’re following in the footsteps of a person who was willing to bet on our homeland, who wanted to make our Traditions known and pass them on to those who maybe only knew them only in part for us to then to do the same. We live in the most beautiful country in the world. Let’s not forget that!”

The truffle is a subterranean fungus in the shape of a tuber, which lives in symbiosis with the roots of some plants, such as, for example, oak, linden, hazel, hornbeam and poplar. It has a fleshy mass called the “gleba”, which is covered by a kind of bark known as the “peridium”. A high percentage of it is made up of water water, fibres and mineral salts, organic substances provided by the tree with which it lives in symbiosis.

Its shape depends on the characteristics of the soil in which it grows: soft ground will encourages the growth of a truffle that is spherical in shape, while a hard, stony ground containing many roots encourages a lumpy form.

There are many kinds of truffles.

The best known and recognised for its gastronomic use are:

The truffle should also be regarded as a real “environmental sentinel”: it does not tolerate pollution or anything else that is harmful to nature.

In a period of great crisis such as this, you can’t sit at home and wait for work. It’s not going to come knocking at your door. You need to flex your creative muscles, or, as in our case, manage to bring back those ancient crafts from Our traditions which have fallen into disuse due to the industrial revolution, which showed us a world of work locked up in factories, and reclaim those crafts which we have the country we live in to thank for.

And yes, if the Italian truffle is one of the most sought after in the world, and Italy is the world’s largest truffle producer, it is also thanks to Our ancient culinary traditions, which had the ancient Romans already licking their fingers over this strange species of mushroom which originates against the odds, growing underground in just a handful of places across the globe.

In fact, there are places to go truffle-hunting throughout the whole of Italy, but the most precious can found in the mountainous regions from northern to southern Italy. Of course we’re talking about the white truffle, the most highly esteemed and the most expensive, whose cost can exceed hundreds of Euro for a little piece weighing a few dozen grammes.

In the territory of Salento, experts argue that truffle hunting can be traced back to the ancient Romans, reliable sources report that in recent times truffle hunters in Salento go back to the ’60s. This has led to hunters from northern and central Italy in eager search of precious truffles  to also go as far as southern Italy in order to satisfy their culinary desires. This secret concealed from the eyes of the Italians has brought them benefits in terms of its image and economic worth, publicising it as a product that is typically obtainable only in mountainous areas, bringingTruffles from Salento or other southern regions to their own northern regions.

In Salento two types of truffles can be found. The first one is called the Bianchetto, Tuber Borchii, harvested in the pine forests at sea level, and the second is the Black Summer Truffle, by the name of Tuber aestivum Vitt., also known as Tartufo Scorzone, and harvested in the oak woods.

The “Al Truffle -Restaurant” owners passion for their many hobbies, changed the course of the family’s history. By pure accident, 10 years ago they discovered the existence of Truffles in the territory of Salento.  And the geniality of entering into a whole new world, the world of truffles. Becoming increasingly specialised in mycology, in the space of a few years, they had become experts in the field. They started to export truffles abroad by the kilo, to Germany, Switzerland, France and throughout the whole of Italy.

From here a new chapter began in the history of Otranto catering. Remaining faithful to the tradition that has always set them apart, with courage and determination and tremendous passion for their work, and after so many sacrifices and trials, they succeeded in achieving their goal: to open a restaurant.

A new project on the territory has been set in motion, publicising a product, recognised by many as being a product only from the centre-north. The need to raise awareness of the truffle as a product hailing from theTerritory of Salento is born.

For information or reservations